It would be easy to dwell on the negatives of pulling out of the Ponton Plod and although I am disappointed it happened at a relatively good time in the running year. The previous Wednesday I had been out on a usual 5 mile lunch time run when a mile or so in I plugged my foot in a pothole and twisted my ankle. I've an increasing history of left ankle sprains, each time the ligaments seem to get weaker and weaker. I managed to carry on running, although my foot was sore it was only a minor twist and I went back to work with only a little swelling. I resolved to rest until race day the following Sunday. By Sunday the swelling was gone and I travelled to Great Ponton, near Grantham optimistic about my chances to run well. I had run round the 27 mile route  a few weeks previously (see report below) so I knew the route well. The sun was negotiating the cloud, it was cool and ideal for running. After registration I returned to the car and taped up my ankles using more tape than usual on the left side. There's a debate about the advantages and disadvantages of ankle taping. There's an argument that taping gives extra support but alternatively some consider taping counter productive because it interferes with the ligaments natural ability to strengthen itself. I am a fan. I use 5cm zinc oxide tape which doesn't affect my running movement but gives me psychological confidence to run across uneven ground. With the exception of today I haven't turned my ankle whilst using tape.
The Ponton Plod has 12, 17 and 27 mile options. I ran out through Stoke Rochford and watched three runners in front peel off along the 17 mile route. I had considered that I was now at the front of 27mile field but on reaching the first checkpoint at Buckminster Water Tower I was surprised to learn there was a runner ahead who had blitzed through about twenty minutes earlier! I was later to find out that he is a 2:35 marathon runner and he was certainly showing his form. I plodded on towards Saltby the sun had come out, it was a lovely cool bright day and I was running strong and happy. The route between Saltby and Croxton Kerrial crosses uneven ground. The trail is full of hard mud clumps hidden under long grass. I was conscious that my ankle was weak due to the previous Wednesday's minor incident and I was being careful with my foot plant. I almost made it to Croxton Kerrial. There is no warning when it happens and it doesn't matter how hard you are concentrating, all of a sudden the foot turns inward it feels as if the joint momentarily dislocates followed by a grim popping sound that makes me wince thinking about it. I tried to carry on, sometimes I can but today the sprain was obviously worse as it hadn't healed properly from the previous Wednesday. I limped into the checkpoint at Croxton Kerrial and retired. 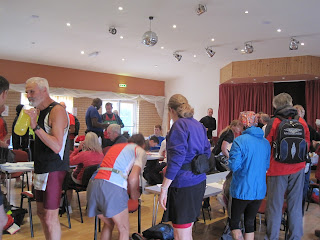 I was more disappointed because it was such a good day for off road running, perhaps one of the last sunny days before the horrors of winter. Thankfully my partner came to pick me up, in the meantime I enjoyed a cup of tea and a slice of cake. I returned to Great Ponton and to pick up my bag and reluctantly took advantage of some delicious parsnip and apple soup and apple pie and cream. It was good but it doesn't taste the same when you haven't earned it. Many of the 12 and 17 mile entrants had returned and were basking in the sunshine and their glory. The Ponton Plod is a great event, organised by Stuart Ashley and friends from Notfast Runners. Stuart is a long time long distance walker his achievements include completions of two LDWA '100's" and even a Bullock Smithy! The Plod is to be recommended, well organised, a decent mainly runnable route and great food at the finish. Just mind out for the ankle twisters!
Posted by Rushi at 06:19 No comments: